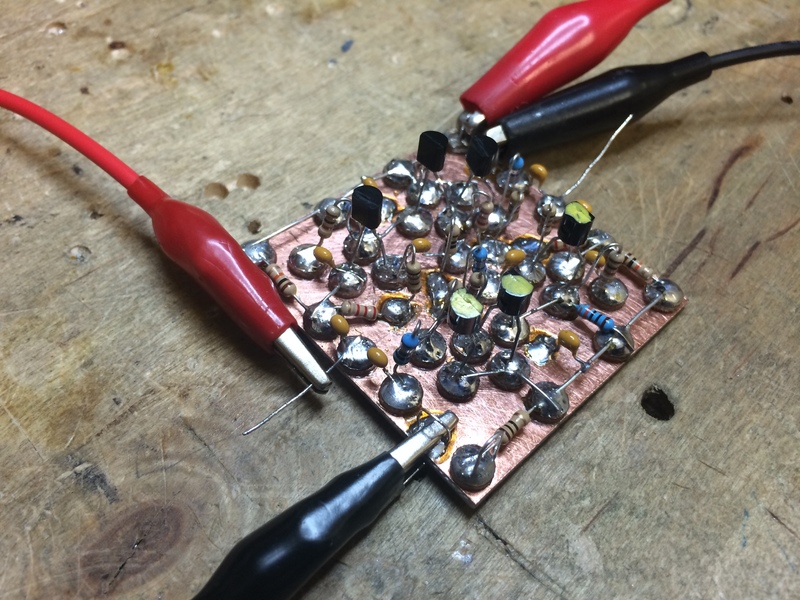 Well I’ve been working my way along the Minima block diagram. Following it up-stream as it were. And so finally arrived at the “Bidirectional RF Amplifier” or Bidi Amp for short. You can see my version above.

When I first started contemplating building a scratch-built homebrew rig from ground up. I was looking around for ideas and very quickly found Farhan’s BitX-20. I was even thinking about using the Realistic DX-100 case for a BitX project. So I started reading everything I could lay my hands on about the BitX. As it happened while I was researching the BitX project Farhan announced the Minima. So I shifted focus and we now find ourselves here.

However during the process of looking into the BitX I stumbled across a file called:-

co-authored by none other than Wes Hayward, W7ZOI and Bob Kopski, K3NHI, from way back in June 2009. The file had been uploaded into the files area of the into the Yahoo BITX20 Group by Farhan himself. So I read it.

It soon became clear that Wes and Bob were offering for consideration what they believed to be a much improved bidirectional amplifier design over that used in the original BitX. It was apparent that Wes and Bob thought the original design less than optimal because the input impedance of that original RF Amp was dependent upon the output termination. I’ll not try explain further here but would encourage anyone building a BitX or Minima to go and have a careful read of this document.

Now I was a bit puzzled as to why this newer RF Amp was missing from current BitX designs. I was reading this in late 2013 some 4 years after the paper was originally written. Perhaps some BitX designs did use the newer design and I managed to miss seeing them? But at the time I concluded that the original design must work well enough. Well enough, that nobody saw any imperative for change. It was also obvious that the newer design used more parts and so would be marginally more expensive. So I mused over this information and decided that if I did go ahead and build a BitX that it would be fun to build it with the newer Bidi RF Amp design.

Then along came the Minima. And guess what? Sitting right at the very heart of the circuit diagram was the very same hitherto missing “Termination Insensitive Amplifier”! Or was it the same? Well No, it wasn’t identical, Farhan had modified it somewhat. But its heritage was clear and Farhan himself cites the Minima amplifier origins on the Minima home page:-

“Bob Kopski and Wes Hayward have produced better feedback amplifiers for BITX a few years ago. This circuit was used as the IF amplifier amplifying the signal towards from the modulator to the crystal filter. It has strong 50 ohms output impedance that drives the crystal filter properly.”

So with all this information rattling around in my otherwise empty head, I made a decision. I decided that I would build my version of the Minima Bidi RF Amp as per the original article by Wes and Bob. I had no specific reason for doing so. I just liked the “symmetry” of the original RF Amp and owing to Wes and Bob’s detailed description of how the circuit operated thought I had a better chance of understanding its operation.

Now on about page 5 of Wes and Bob’s document is a table. This table lists various resistor combinations that can be used for various gain levels while maintaining a 50 Ohm input and output impedance. I knew that the Minima Bidi Amp was supposed to have about 20dB gain. So I selected the option from the table that read:-

I selected this option because 19.3dB gain was pretty close to the nominal 20dB. Other builders had been getting about 16 to 18dB in any case. And also because this option had the second from highest return loss figure of 30dB.

So I went ahead and built one. 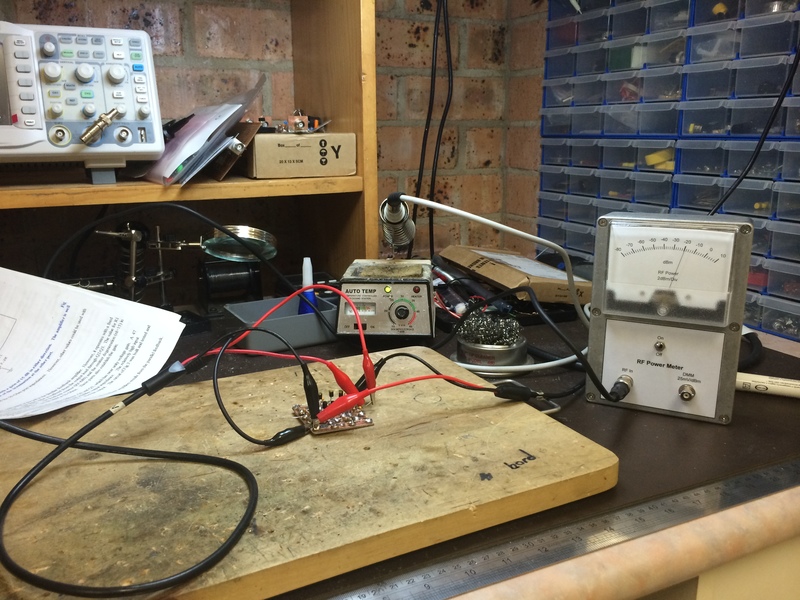 And there it is connected to my RF power meter. Which is a silly photograph to show you. Because the power meter in the photo is measuring the input RF power level to the Bidi RF Amp at -20dB as adjusted from the signal generator. You’ll just have to take my word for it that when looking at the output it was almost exactly 0dB for +20dB of gain. As tested in both directions. The ‘scope output was a beautiful crisp clean sign wave. In short, mine works exactly as Wes and Bob said it would. I’ll try to take a ‘scope snapshot and upload it here soon.

Did it work first time?

I built the first half of the RF Amp one weekend no problem at all. I was being careful because it was new territory. The next weekend I went and added the second half. I was making haste because I knew exactly what I was doing… Problem. Both sides stopped working properly. Grr! Enact fault-finding mode. I found that in my haste I had installed a 180K Ohm resistor, instead of a 180 Ohm, Oops. And then I found a solder bridge. But still it was not working… Darn!

About 3 hours later I discovered that the 0.5 metre test lead with alligator clips. Which I had added just to provide a convenient ground point for both scope and signal generator was NOT a very good idea! Once the offending lead was removed I then got precisely 19dB of gain @ 20Mhz as measured on the 50 Ohm terminated scope. Not bad for a predicted gain of 19.3dB.

For those interested. The transistors I used happen to be BC547-B’s with a beta of ~230.

So happy with the success of my first Bidi RF Amp build was I, that I immediately went and built another one! Identical to the first. And this time, I took my time.

And it worked. First time! 😉