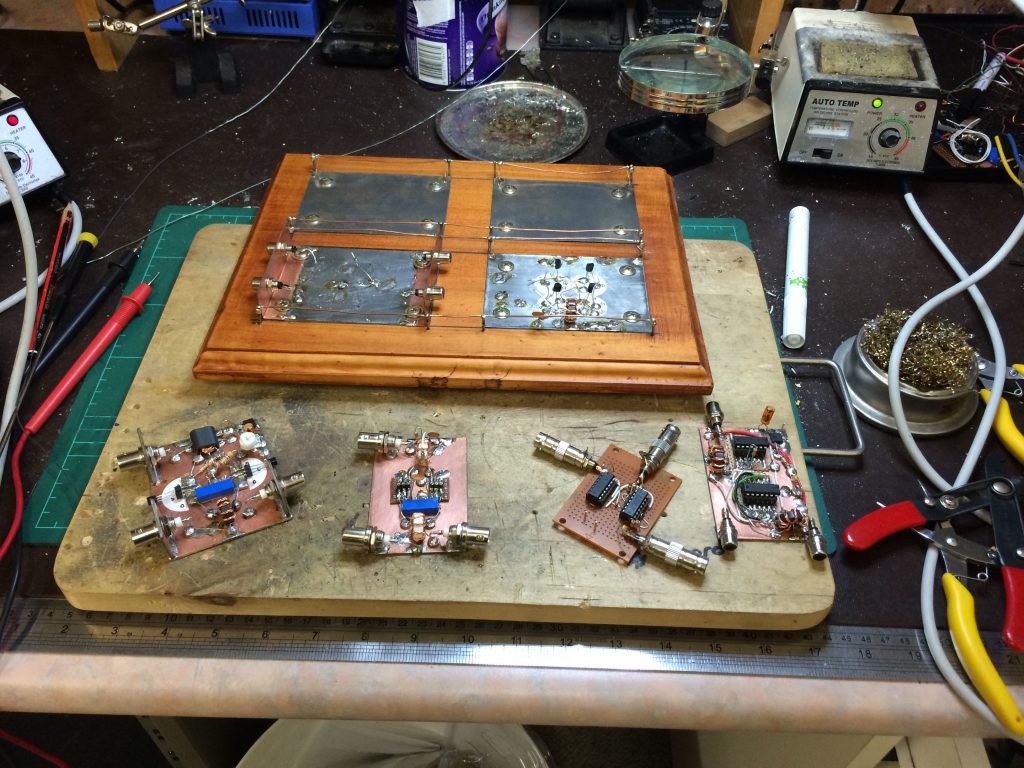 Well its been a while between posts. I got tied up experimenting with Mixers for longer than expected. Here you can see a collection of the various mixers I’ve built over the last few weeks. A Passive Quad J-FET Mixer, Two versions of the J-FET KISS mixer and a couple HC4066 CMOS switching mixers. Many of these went through two or three re-builds while playing around with various configurations.

So why all the different mixers? 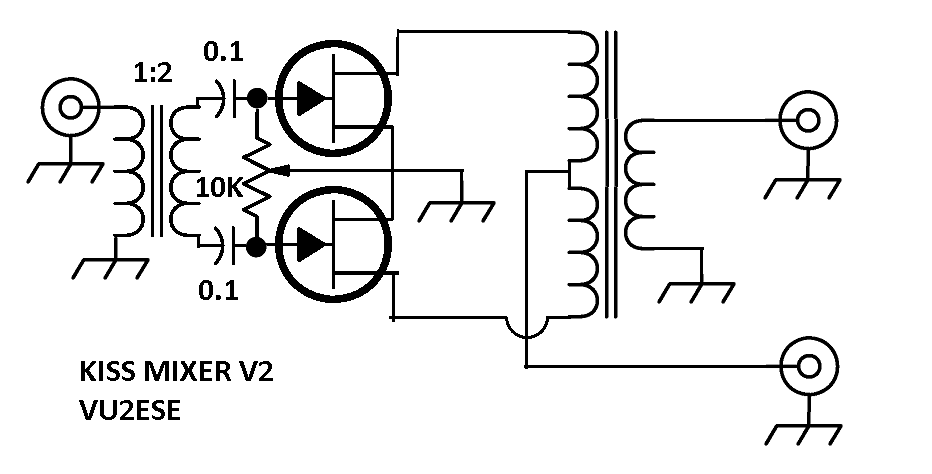 Early in the life of Minima some builders started reporting high levels of local oscillator leakage to the RF port in TX mode. You can see this at the 34Mhz point in the spectrum analyser screen shots above. The solution? Farhan then offered the KISS V2 circuit for testing. This circuit gave extremely good adjustable LO suppression but some experimenters, including myself, started seeing higher levels of insertion loss with this mixer. The original KISS mixer had about 7dB insertion loss while the newer KISS V2 was being reported at 10dB+. The first version of KISS V2 I built was up around 14dB. By the third re-build I did get it down to 10dB but couldn’t manage to get it any lower than this.

To me the large local oscillator (LO) leak seems inherent in the design of KISS V1 and other variant mixers based on this pattern. If you look at the circuit schematic you can see that the LO (if nicely formed) will be of equal but opposite magnitude in each side of the input into the mixing transformer. As such these signals should cancel out very nicely at the mixing transformer centre tap. However not so much attenuation is available to the other winding of this transformer. Both the DSA-815 screen shots above are looking at the output from the port on the second mixing transformer winding, not the centre tap port. Hence the high LO level at 34Mhz. 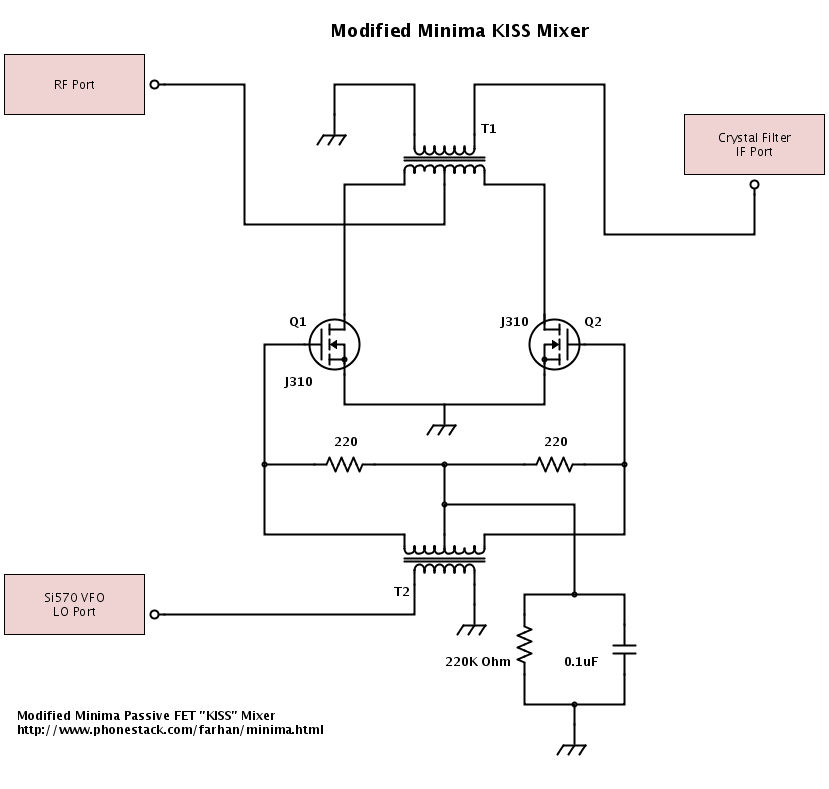 In all this experimenting I did a lot of Googling slash reading and came across this paper:-

On page 16 I found “Figure 28: Circuit diagram of a FET based switching mixer”

So on a whim I decided to blend this design with the alternate bias method that Joe outlined. This modified circuit can be seen left. I’m now somewhat presumptuously calling this J-KISS version 3. Because that’s easier than typing “Modified version 1 Minima J-KISS mixer with Joe’s floating bias modification and a couple of extra resistors that I added just to see what would happen…”, all the time. 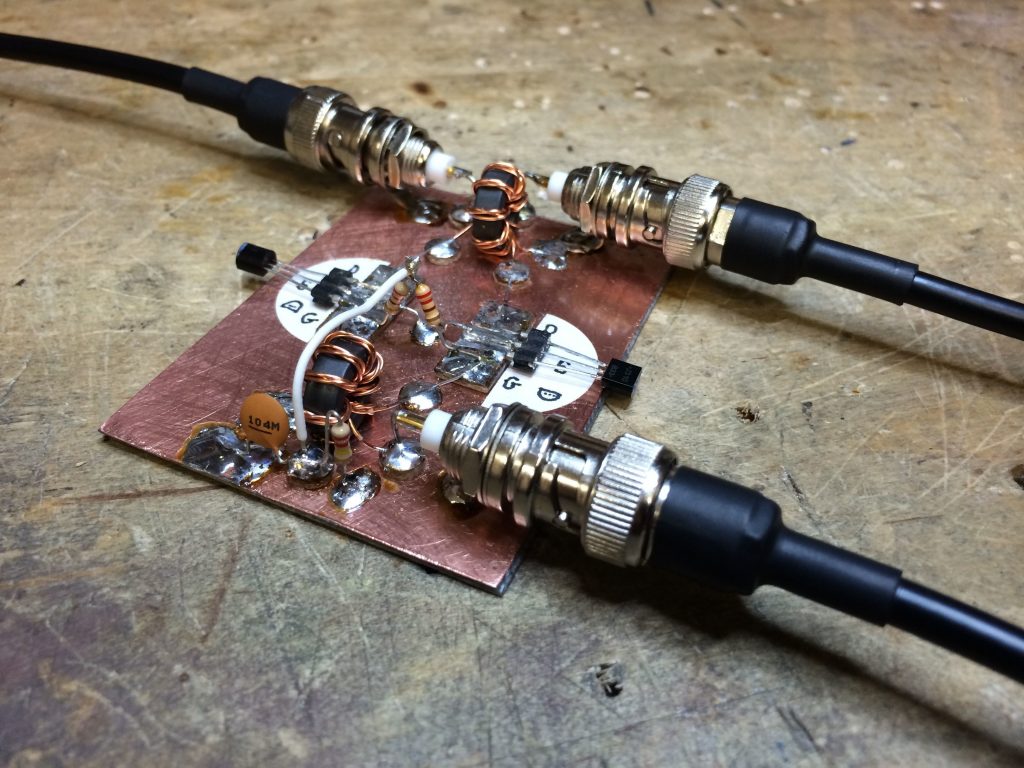 Well it turned out that it worked rather well. In fact for me it worked better and more consistently than any other version that I tried building. Joe’s floating bias had pretty good conversion loss already but adding the resistors dropped the unwanted local oscillator noise almost into the noise floor. 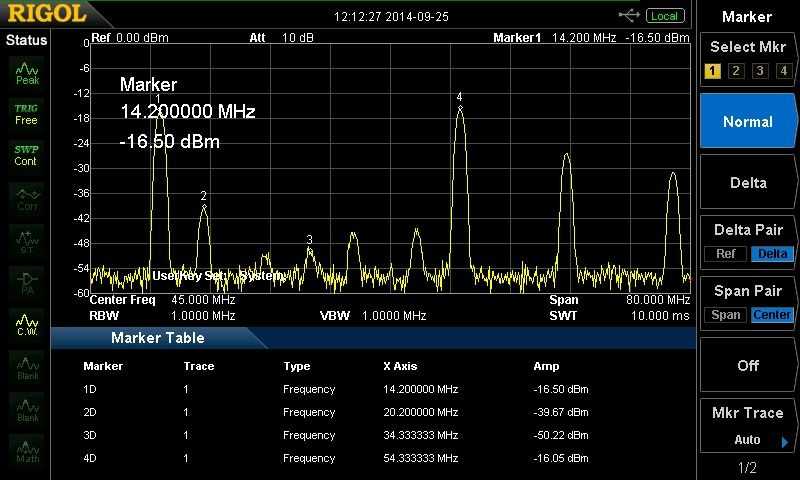 So here is a couple of screen shots of KISS V3 in action. To the left is the mixer in the transmit direction. While on the right is the same mixer running in the receive direction. Note that this clearly shows the difference in the LO leak level depending in direction of signal flow (which port you’re looking at). Which is high here in the receive direction. This characteristic was true of all the J-KISS mixer variants I built. 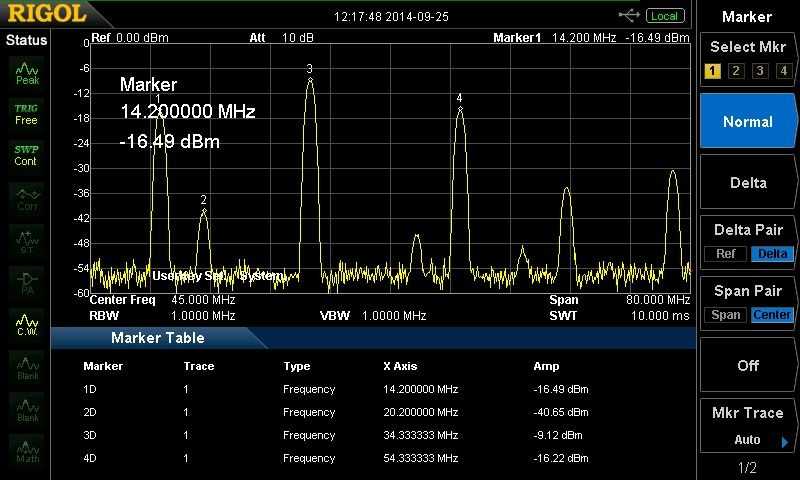 A couple of important things we should note about this high LO leak level. First, in the original Minima circuit the mixer was connected the other way around. So this higher LO level would be present during transmit and flow through to the the low pass filters. Simply reversing the direction of signal flow through the mixer as done here with J-KISS V3 (and as Farhan intended for J-KISS V2) will now present this higher level to the crystal filter instead. The idea being the the crystal filter will do a better job of filtering it out than the low pass filter. Will this cause any receiver issues? I don’t know yet but at least the transmitted signal should now hopefully be clean and within legal limits for harmonics.

The second important thing of note is that in those J-KISS mixer variants with some sort of manual bias adjustment. Which include both of Farhan’s J-KISS V1 and V2 designs (although the bias arrangement is very different in each). The adjustment will make a significant change to the LO leak level but only on the port connected to the centre tap of the mixing transformer. On the port connected to the second winding I hardly noticed any change at all. Just a few dB at most.

Now my J-KISS V3 mixer was looking pretty good. And while performance is nothing to get too excited about. Let’s face it, a cheap Mini-circuits SBL-1 double balanced diode mixer module would probably run rings around it. But at least my mixer was behaving like a proper mixer should and I can say I built it myself! Oh, and it’s also operating as a switching mixer or “chopper” which is important in the Minima. This version was in some ways the easiest to build and get going because it has no bias adjustment. But herein lies the catch… 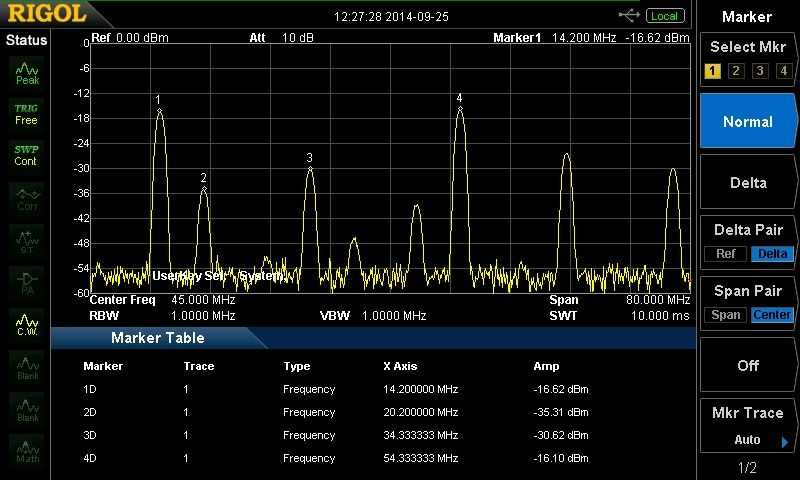 For this mixer to work well the J310 FET’s must be very well matched prior to building the unit. So what happens if you don’t? The spectrum analyser screen shot to the left shows exactly the same mixer used above but with a pair of deliberately mismatched J310’s installed. We can see that all the unwanted signal levels jump upwards. The dreaded LO leak level alarmingly so. Interestingly the conversion loss seemed to remain largely unaffected. Compare this screen shot with the one two above.

So building this mixer means that you must match your FET’s. Personally having now been through the FET matching exercise I don’t find the task too onerous. No more difficult than matching the diodes we typically use in other mixers. A procedure which we Radio Amateurs take for granted. And probably a lot easier than profiling/matching crystals for ladder filters.

It occurs to me that the FET matching process only really requires an accurate digital multimeter. While the adjustment of a mixer balancing pot ideally needs a Spectrum Analyser. Admittedly you could probably make do with a general coverage receiver listening to the LO frequency via a direct cable connect to the mixer with some in-line attenuation. The multimeter seems the somewhat simpler though. Anyway it could be that for the average home builder pre-matching the FET’s used to build a mixer may be in fact be easier than adjusting a balance control setting after the mixer is built. Perhaps, maybe… 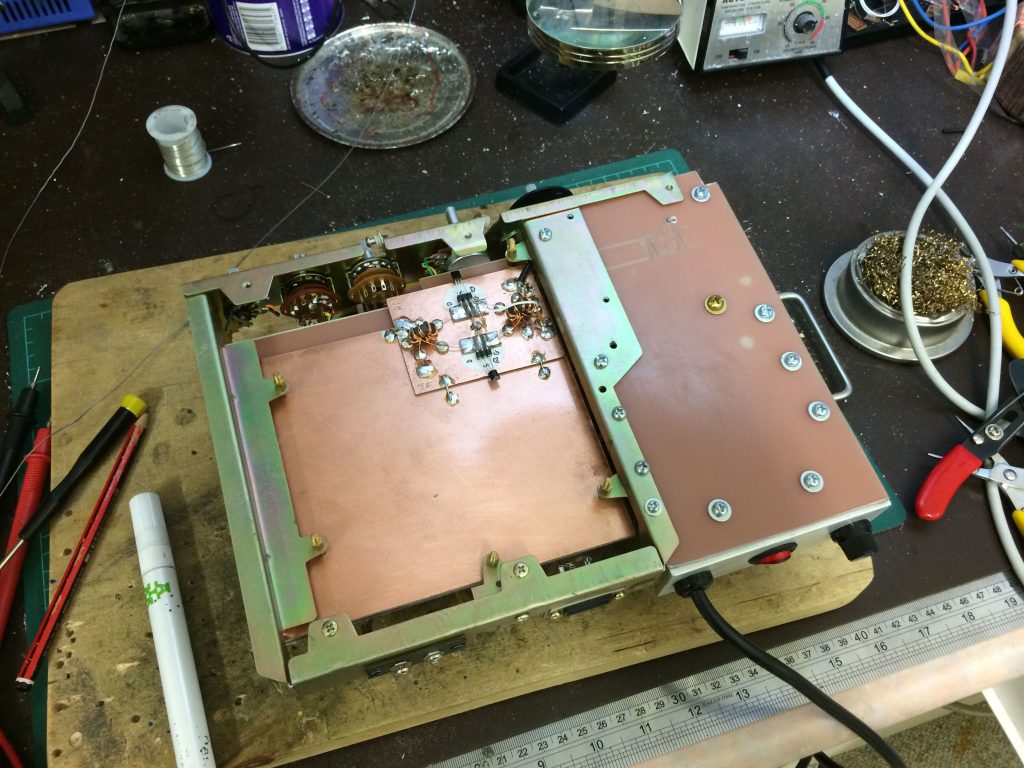 So finally I tired of playing with mixers. There is much, much more that I have not tried and should have. Looking back there are experiments which need to be re-done because of flaws in my methodology or understanding at that time. Please understand that what I present here are just my experiences. While I stumble around learning new skills. This is what happened to me. With the mixers that “I” built! I’m no Electrical Engineer or RF Design Engineer. Just a hobbyist Amateur Radio enthusiast. So your mileage, as they say, may vary – significantly! But if this project was ever going to reach an operational state. Then progress had to be made at some point. At a later date since this build is a modular scratch build with no PCB to lock me into a particular design. It will be easy enough to swap out the mixer module with an improved version.

So enough was enough and I installed my modified J-KISS in the radio. As seen here from the underside. No connection to either the IF or RF ports as yet. The coaxial cable from the LO port can just be seen sneaking its way out and immediately up to the Si570/logic PCB topside.

On a final note this section would not be complete without mention of the “Double KISS”. Farhan released this circuit to the Minima group for experimentation. Called the “Double-KISS”, no doubt because it is doubly balanced instead of singly balanced like the original Minima JFET KISS… I think? This mixer uses a modern high speed CMOS bus switch at its heart. Which brings it much closer to the original KISS design detailed in the “Mixer Musings and the KISS Mixer” paper by Chris Trask/N7ZWY. Which is where all this mixing business started in the first place.

So a lot of experimental energy is now being invested in this direction. This style mixer promises exceptional performance. The only downside being the somewhat exotic part required. They are not particularly expensive, just not available from your local electronics store. So the Minima continues to evolve as time goes by. For myself I have ordered some suitable high-speed CMOS bus switches for experimentation but at this stage plan on completing the radio close to the original design. I can then evaluate its performance before making any changes like a mixer substitution.

Well that’s all for the moment. Next up I’ll back-track a little and talk about JFET matching in more detail. Then we shall tackle the 20Mhz Crystal Ladder Filter.